Learn more about our breeding program, mission, organization, and major objectives at the Rice Experiment Station. 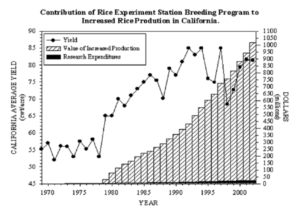 The primary mission of CCRRF at the California Rice Experiment Station (RES) is development of improved rice varieties of all grain and market types to sustain high and stable grain yield and quality with minimum environmental impact for the benefit of California rice growers.

California rice breeding research from 1912 to 1969 was conducted at RES by a CCRRF/USDA breeder and cooperating University of California (UC) and United States Department of Agriculture – Agricultural Research Service (USDA-ARS) scientists. Only three tall and relatively late maturing rice varieties (short grains Caloro and Colusa and medium grain Calrose) were developed and primarily produced during this first 58 year history of rice in California. A grower-funded comprehensive rice breeding program was initiated at RES in 1969 with an expanded professional research staff that eventually included three plant breeders (Ph.D. level), a plant pathologist (M.S. level), and a director/agronomist. A large accelerated breeding program was built utilizing extensive crossing, cold tolerance screening, statewide yield testing, and winter nursery facilities. Cooperative research, testing, and germplasm were provided by UC and USDA-ARS. The program emphasis in the beginning was on increasing grain yield with retention of typical California short- and medium-grain rice cooking quality. Development of long-grain rice, which is best adapted to tropical climates, for production in the temperate California climate was given priority to allow grower and industry rice sales in the west coast long-grain markets. As progress on grain yield was made, breeding was intensified for improved grain quality, specialty rice, disease resistance, and adaptation.

California average rice yields in 1970 were 5500 lb/acre when the predominant rice varieties were Caloro, Colusa, and Calrose. Average yields with new rice varieties have increased to about 8200 lb/acre in recent years and California produces some of the world’s highest commercial yields. This is the result of improved varieties being grown with improved weed control, water management, and other technological advances. California rice yields decreased significantly in 1995 and 1996 probably because of poor growing seasons, however, many fear that rice straw management practices, diseases, and less effective weed control may be causing these yield decreases. Major yield advances were made initially by introduction of the semidwarf plant type into adapted California germplasm through use of indica rice sources (TN­1, IR-8) and induced mutation (Calrose 76, M-401, etc.). Through a recurrent crossing and selection program, breeders continue to make incremental yield increases. Adapted long-grain germplasm has been developed and is expected to provide not only an additional germplasm source for genetic progress in long-grain varieties but also in short and medium grains. Progress continues to be made on increasing grain yield potential and stability but increases are smaller and more difficult to achieve. Future requirements for different rice, improved grain quality, disease and insect resistance, and environmental concerns will be obstacles to future yield increases.

Efforts to improve adaptation of rice to California have been underway since establishment of RES in 1912. The temperate climate provides a limited growing season in California with low temperatures common at planting and grain formation stages. Most rice varieties from other regions of the world do not have adequate levels of seedling vigor, cold tolerance, and resistance to low temperature induced sterility (blanking) required for California. Screening for seedling vigor, resistance to low temperature sterility, and grain maturity are integral parts of the breeding program. Rice varieties have been developed in different maturity groups with emphasis on early and very early maturing ones in all grain types. A choice of rice varieties with different agronomic characters (maturity, cold tolerance, etc.) gives growers viable choices to reduce risks by high yield stability in most California rice growing areas. High yielding long-grain varieties have been successfully developed for California. Disease resistance is a major research emphasis with special attention given to stem rot and aggregate sheath spot diseases. Progress in transferring high levels of resistance into California varieties continues to be a formidable breeding objective. Cooperative research with UC and USDA that involves mapping disease resistance genes has improved progress. The 1996 outbreak of rice blast disease and its spread to approximately 50,000 acres in 1997 was a serious threat. Fortunately, the impact of this disease has been minor, however breeding for blast resistance is continuing. M-208 was developed and release and is resistant to the current race found in California.

Screening and selection for grain quality has been an essential part of the RES breeding program since 1912. The emphasis and growth in rice grain quality research has been expanded greatly in the past decade at RES. Increased emphasis is given on milling quality, kernel size and shape, and cooking and processing characteristics. New rice varieties for special markets (e.g. aromatic, sweet rice, basmati, and premium quality types) require extensive evaluation and testing.

From 1918 to 1970 California grew primarily only three tall, late maturing, short- and medium-grain varieties, Caloro, Colusa, and Calrose with average yields of about 5500 pounds per acre. An accelerated breeding program was initiated in 1969 and funded by growers through a marketing order by the California Rice Research Board. By 1992 more 95% of California’s rice acreage was planted improved semi-dwarf rice varieties. California average rice yields have increased to over 8000 pounds per acre. The 42 rice varieties released since 1969 include very early to late maturing short-, medium-, and long-grain types (all major U.S. market classes), and specialty types such as waxy (sweet), premium medium and short grains, and aromatic rice.

The relationships between rice varieties, grain yield, research costs, and financial return on research are shown in the adjacent figure. Benefits from breeding research began accruing to growers in 1979 when the first semi-dwarf varieties Calrose 76, M7, and M9 were grown on 30% of the California rice acreage. The accrued gross financial return to rice growers attributed to rice breeding research with no value added economic multiplier increased to $1 billion in 2002. This cumulative return is based on the assumptions that 60% of the actual rough rice yield increase from 1969 to 2002 was the result of improved varieties using an annual price of per cwt for rice from that production year. Total grower expenditures for rice breeding research since 1969 were $25 million. Rice growers have received $40 per $1 invested in the rice breeding program at RES even though there was a 10-year lag time from initiation of the breeding program (1969) until grower benefits began to accrue (1979). Additionally California growers have benefited from earlier maturing varieties and the development of diverse selection of market and quality types.

The production and maintenance of foundation seed of currently grown public rice varieties is an important activity at RES. Its purpose is to assure rapid availability of genetically pure, weed free, and high quality seed for the benefit of the California rice industry. Foundation seed of 13 rice varieties is currently produced at RES as well as basic seed of two Japanese premium quality varieties. The Foundation Seed and Certification Service at UC Davis cooperates by providing field and laboratory inspections and allocating foundation seed to growers. The RES seed program is financed with revenue received from the sale of foundation seed and not grower research funds. The price of California foundation seed is low to encourage widespread use of certified rice seed for paddy rice production. Foundation rice seed prices in other U.S. rice producing states are much higher than the price in California and the cost of rice seed for milling rice production is greater in those states. More than 90% of the annual California rice acreage is seeded with registered and certified seed derived from this foundation seed.